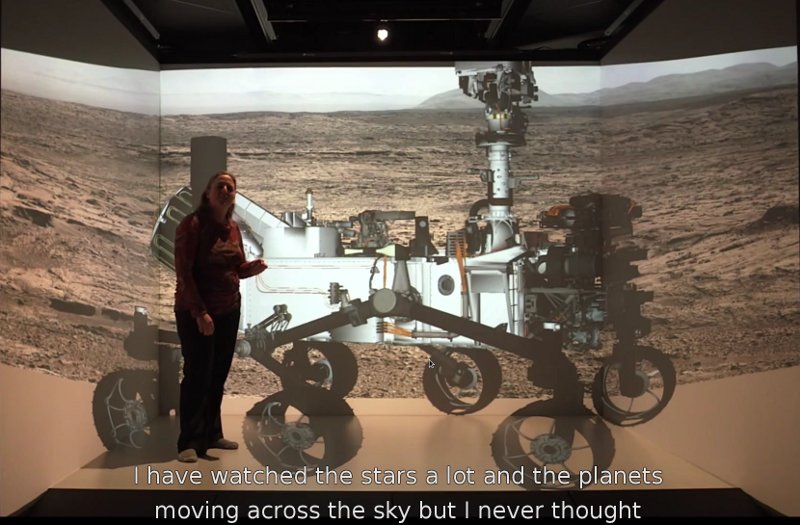 The first video is primarily about the Curiosity rover itself, and shows Dawn in the CAVE interacting with a life-size 3D model of the rover. In the background are panoramic pictures that the rover sent back from Mars. As I mentioned previously, the 3D rover model was kindly provided by the Jet Propulsion Laboratory, and consists of several million polygons and high-resolution textures.

The second video is covering a variety of topics, from earthquakes in, or rather underneath, California and elsewhere, to Dawn walking on the surface of Mars, reconstructed from high-resolution orbital measurements and represented using the Crusta virtual globe. There are a few bits towards the end that are similar to the first video, but there is no repeated material, so both videos are definitely worth watching all the way through.

Let’s look at the technical side a bit. I’ve previously written about how to film video in a CAVE, and the film crew were on board. First off, you can clearly tell the difference in video quality between a $200 consumer video camera and professional equipment, and the difference in audio quality when you have an actual sound guy in charge is of course tremendous. Beyond that, we used a variety of techniques to capture the holographic nature of the CAVE. We did some static camera set-ups, some hand-held work (which gave me the creeps, due to a huge heavy camera in a small space with very fragile walls), and even tried some split-CAVE set-ups (which I don’t think ended up being used).

With all that awesomeness, unfortunately a small problem snuck into a section of the second video, from 1:40 to 2:18. Before reading on, can you tell what it is?

The problem was that the director wanted a wide shot of Dawn walking on the surface of Mars (at 1:1 scale) using Vrui‘s surface-aligned walking navigation tool, meaning the camera operator had to be way outside of the actual CAVE. The CAVE’s tracking system doesn’t reach that far, so I had to use a fixed-camera setup with a virtual camera position matching the intended filming position. However, between me setting up the position and actual filming, the camera operator knelt down to get a more “dramatic” camera angle, and moved a bit closer to the CAVE as well, both of which I didn’t catch in time, or I would have corrected the viewing position. The result is that this segment of the video was filmed with the real camera position significantly lower than the configured camera position, leading to a distorted image, with the edges of the field-of-view running up the CAVE’s side walls instead of being level. This is probably something that bothers no one except me, but I wanted to point it out in case anybody was wondering why the surface of Mars looks slightly strange. It’s when artistic vision clashes with technical requirements. 🙂

The positive outcome is that I immediately went and implemented a more interactive way of setting up virtual camera positions for filming, to be able to quickly correct such mistakes in the future without having to cause huge delays in production.

Oh, and here’s a neat coincidence: the film team’s producer was involved with creating the Minority Report dream sequences back in the day, so we had something to talk about off the bat. But since I have no gripes with that sequence (unlike that other sequence, you know the one I’m talking about), everything went swimmingly.