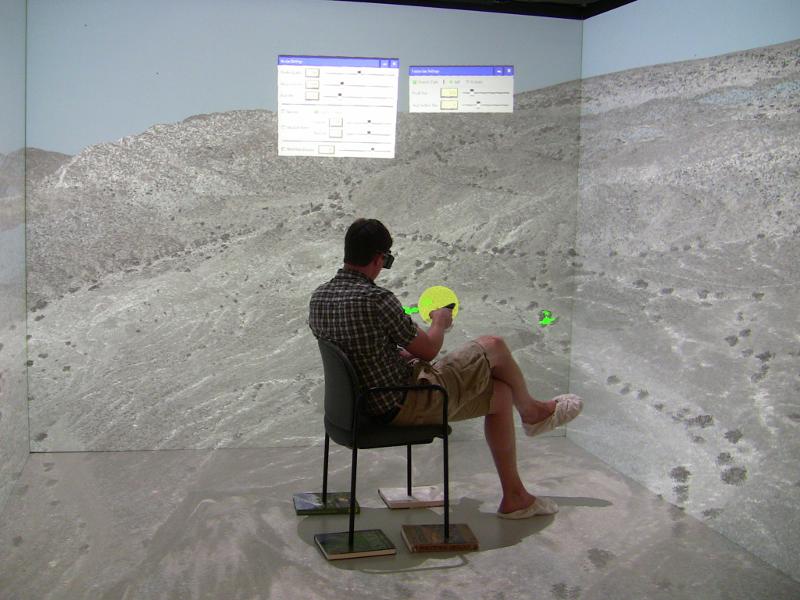 After having collected tremendous amounts of aerial and terrestrial LiDAR data of the fault rupture and environs immediately after the quake, Peter and several other graduate students spent large amounts of time in their offices and in the CAVE analyzing the data. Peter, by himself, logged about 150 CAVE hours total (according to the sign-up calendar). The photo in Figure 1 was taken probably 100 hours in, explaining the relaxed stance. His chair resting on four geology textbooks is not a commentary on their quality; it’s to prevent scratching up the CAVE’s floor (which is a front-projected screen after all).

My larger point here is that it’s insane to argue that people only use CAVEs or other holographic display environments because they’re cool toys, or because of their novelty. Once you reach the 100 hour mark, you’re no longer playing around, and it’s just another scientific instrument that gets the job done.

Peter worked with the data in several ways. Initially, he manually removed vegetation and other “noise” points from the scans, to create the best possible representation of the real rupture geometry. It turned out that automatic methods were too aggressive, removing large percentages of desired ground points along with vegetation. (In a nutshell, vegetation removal algorithms remove everything above the local elevation minimum in a small neighborhood, assuming that only the lowest points are solid ground. However, LiDAR data always has some random noise, meaning that solid ground is represented by a “cloud” of points distributed above and below the true elevation. Removing all but the minimum will bias the ground elevation estimate downwards, often by significant amounts.)

In a second step, Peter used LiDAR Viewer‘s primitive fitting techniques to measure lateral displacement along the fault rupture with unprecedented precision. The efficient interaction with his data in the CAVE allowed him to take large numbers of measurements for each site, which in turn enabled him to estimate the uncertainty in his measurements by applying a Monte Carlo approach.

The hard work done by Peter and others was rewarded with several high-impact publications. These two are directly related to Peter’s work I just described:

And here is Austin Elliott, PhD student, describing his work with a terrestrial LiDAR scan of the fault rupture by interacting with a holographic representation of same in a low-cost VR environment:

2 thoughts on “When the novelty is gone…”