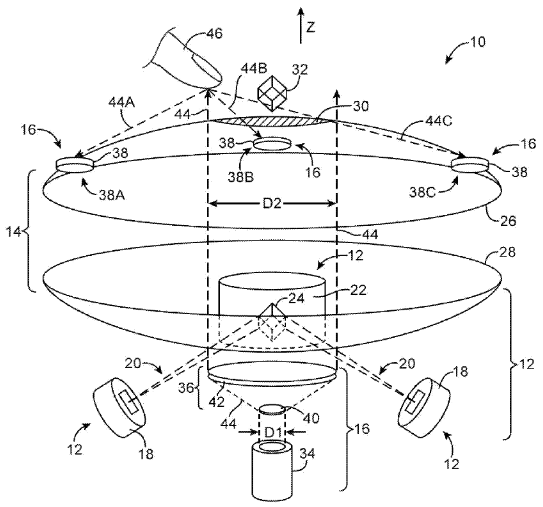 But that aside, is this really a holographic display? Yes, yes it is. It is not based on lasers, mirrors, and interference, but it creates a free-floating, three-dimensional, real image, and that’s good enough for me. To be a bit more technical about it, the correct term would be “aerial image projection of a volumetric display,” but since that would elicit at most a “huh?” reaction from anyone who’s not an expert, and since the visible result lines up almost perfectly with what the general public imagines a hologram would be, we’ll let it slide (unlike some other stuff).

PS: reading the patent, it’s hilarious how those things can be ultra-vague and ultra-specific, but in a pointless way, at the same time. Exhibit 1: “display 12 may be a volumetric display such as a multiplanar or rotating panel display, a holographic display, an integral imaging display, a re-imaging display, a parallax display, or other suitable display capable of displaying 3D images” (that’s vague; you sure you didn’t forget any potential real or fictional technology in that list?). Exhibit 2: “The input signal provided to mixer 56 over line 64 may be proportional to reflected optical signal 44′ and may take the form of the following sinusoidal signal: sin(.omega..sub.LOt+.phi.) (1)” (wow, I’m blinded with poorly type-set math, but since mixer 56 and line 64 may or may not exist, what’s the point?). I seem to remember that patents were supposed to protect a specific implementation of an idea, not a fuzzy general notion of some idea that might or might not ever be implemented. But I guess that’s why I wouldn’t pass the patent bar.

2 thoughts on “Apple Patents Holographic Projector (no, not quite)”