Note: I started writing this article in June 2017, because people kept asking me about details of the PS Move tracking algorithm I implemented for the video in Figure 1. But I never finished it because I couldn’t find the time to do all the measurements needed for a thorough error analysis, and also because the derivation of the linear system at the core of the algorithm really needed some explanatory diagrams, and those take a lot of work. So the article stayed on the shelf. I’m finally publishing it today, without error analysis or diagrams, because people are still asking me about details of the algorithm, more than four years after I published the video. 🙂

This one is long overdue. Back in 2015, on September 30th to be precise, I uploaded a video showing preliminary results from a surprisingly robust optical 3D tracking algorithm I had cooked up specifically to track PS Move controllers using a standard webcam (see Figure 1).

Figure 1: A video showing my PS Move tracking algorithm, and my surprised face.

During discussion of that video, I promised to write up the algorithm I used, and to release source code. But as it sometimes happens, I didn’t do either. I was just reminded of that by an email I received from one of the PS Move API developers. So, almost two years late, here is a description of the algorithm. Given that PSVR is now being sold in stores, and that PS Move controllers are more wide-spread than ever, and given that the algorithm is interesting in its own right, it might still be useful.

The PS Move controller has two devices that allow it to be tracked in three dimensions: an inertial measurement unit (IMU), and a rubbery sphere that can be illuminated — in all colors of the rainbow! — by an RGB LED inside the sphere. As I have discussed ad nauseam before, an IMU by itself is not sufficient to track the 3D position of an object over time. It needs to be backed up by an external absolute reference system to eliminate drift. That leaves the glowy ball, and the question of how to determine the 3D position of a sphere using a standard camera. In principle, this is possible. In practice, as always, there are multiple ways of going about it. 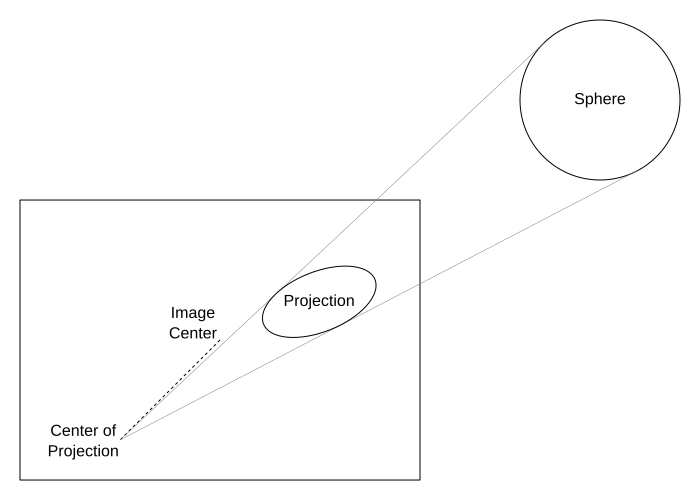 Figure 2: The projection of a sphere onto a pinhole camera’s image plane is an ellipse whose major axis points towards the image center.

To an idealized pinhole camera, a sphere of uniform brightness (fortunately, Sony’s engineers did a great job in picking the diffuse ball material) looks like an ellipse of uniform color (see Figure 2). Based on the position of that ellipse in the camera’s image plane, one can calculate a ray in 3D camera space (where the projection center is the origin, and the viewing direction runs along the negative Z axis), and based on the ellipse’s apparent size, one can calculate a distance along that 3D ray. Together, those two define a unique point in 3D space. The algorithm breaks down as follows:

Step 1 is a basic image processing problem, namely blob extraction. Step 2 is more tricky, as fitting an ellipse to a set of pixels is a non-linear optimization problem, which is difficult to implement efficiently. Step 3 is also difficult, but for fundamental mathematical reasons.

No matter the representation, uniquely identifying an ellipse requires five parameters. One representation could be (center x and y; major axis; minor axis; rotation angle). Another one could be (focal point 1 x and y; focal point 2 x and y; total chord length). But identifying a sphere in 3D space requires only four parameters (center point x, y, and z; radius). Therefore, there must be an infinity of 2D ellipses that do not correspond to any possible projection of a 3D sphere onto a pinhole camera’s image plane. However, the ellipse fitting algorithm in step 2 does not know that. Under real-world conditions, one would expect to receive parameters that — at best — merely resemble a projected sphere. On top of that, calculating the sphere parameters that correspond to a projected ellipse, even assuming there is such a sphere in the first place, is another tricky non-linear optimization problem (for example, the projection of the sphere’s center is not the center of the projected ellipse). In practice, this means most 2D approaches to the problem involve some guesswork or heuristics, and are not particularly robust against noise or partial occlusion.

Given the 2D approach’s issues, would it be possible to solve the problem directly in three dimensions? The answer is yes, and the surprising part is that the 3D approach is much simpler. 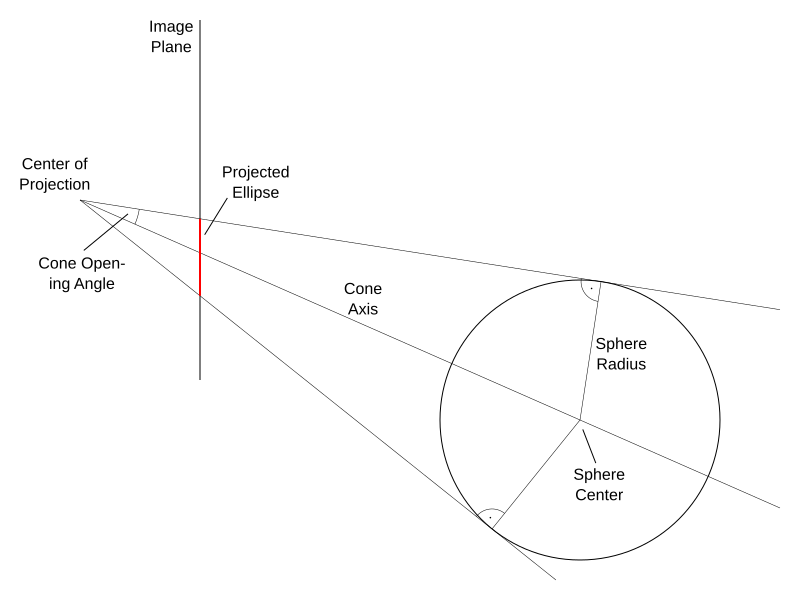 Figure 3: A sphere enveloped by a 3D cone whose apex is at a camera’s center of projection.

Imagine, if you will, a sphere in 3D space, and a 3D point that is somewhere outside the sphere. Those two together uniquely identify a cone whose apex is at the imagined point, and whose mantle exactly touches the imagined sphere (see Figure 3). Now, without loss of generality, assume that the imagined point is at the origin of some 3D coordinate system, for example the origin of a 3D camera-centered system, i.e.,  the camera’s focal point. Then, assuming that the sphere’s radius is known a priori, its remaining three parameters have a 1:1 correspondence with the three parameters defining the cone (axis direction, which only has two free parameters due to its unit length, and opening angle). In other words, if one has the parameters of a cone touching a sphere, and the sphere’s radius, one has the 3D position of that sphere relative to the cone’s apex.

How does this help, when all one has is a set of pixels in a camera’s image that belong to the projection of a sphere? First, and this is yet another basic image processing problem, one reduces the set of pixels to its boundary, i.e., only those pixels that have at least one neighbor that is not itself part of the set. That set of pixels, in turn, defines a set of 3D lines through the camera’s focal point, whose direction vectors can be calculated from the camera’s intrinsic projection parameters, which are assumed to be known a priori. The important observation, now, is that the 3D lines corresponding to those boundary pixels in the camera’s image must be part of the imaginary cone’s mantle, because they all go through the cone’s apex (the camera’s focal point), and all touch the sphere.

Therefore, given a set of 2D pixels in a camera image (or their corresponding lines in 3D camera space), we can calculate the parameters of the unique cone fitting all these lines by solving a large set of equations. Assuming that each line already goes through the cone’s apex, which is a given based on how a camera works, when does a line lie inside a cone’s mantle? The geometric definition of a cone is the 2D surface swept out by a line going through a fixed point (the cone’s apex, check!) rotating around another fixed line going through the same fixed point (the cone’s axis). In other words, all lines in the cone’s mantle form the same angle with the cone’s axis (the cone’s opening angle).

In other words, each boundary pixel’s line direction pi defines an equation cos(α) = pi·a / (|pi|·|a|), where a and α are the unknown cone parameters. Together with an additional equation restricting a to unit length, i.e., |a| = 1, this system solves the problem. Unfortunately, this is still a non-linear system (the unknowns ax, ay, and az appear squared and underneath a square root), and a large one at that (with one non-linear equation per boundary pixel), which means it is still difficult to solve.

Fortunately, there is a way to restate the problem that turns the system into a linear one, and best of all — it is not an approximation! The trick, as so often, is to express the system of equations using different unknowns. Let us look at a and α again. Due to the camera being a real camera, we know that az, the third Cartesian component of a, is always smaller than zero (I mentioned above that in the canonical camera system, the camera looks along the negative Z axis). That means we can divide vector a by the negative of its third component, yielding a‘ = a/-az = (ax/-az, ay/-az, -1)T = (ax’, ay’, -1)T. Turning this around yields a = a‘·(-az), and we can now rewrite the original equation as cos(α) = p·(a‘·(-az)) / (|p|·|a‘·(-az)|).

But didn’t this just complicate matters? Turns out, things are not as they seem. Dot product and Euclidean length are linear operators, meaning we can pull the “·(-az)” out of both, remembering that |a‘·(-az)| = |a‘|·(-az) because az is negative, and then cancel the one in the numerator with the one in the denominator, resulting in cos(α) = p·a‘ / (|p|·|a‘|). And lo, given that a‘ only has two unknowns, ax’ and ay’, we just eliminated a variable — leaving us three, exactly the number we expected based on the problem statement!

The 3D algorithm described above is really quite elegant, but there are some details left to mop up. Most importantly, and that should go without saying, getting good 3D position estimates from this algorithm — or from any other algorithm solving the same problem, for that matter — requires that the calculation of 3D line directions from image pixels is as accurate as possible. This, in turn, requires precise knowledge of the camera’s intrinsic projection parameters and its lens distortion correction coefficients. It is therefore necessary to run a good-quality camera calibration routine prior to using it in applications that require accurate tracking.

Second, the algorithm’s description calls for 3D line directions that touch the 3D sphere, but as written above, using boundary “inside” pixels does not yield that. An “inside” pixel with “outside” neighbors does not define a line tangential to the sphere, but a line that intersects the sphere. This results in the cone’s opening angle being under-estimated, and the resulting distance between the sphere and the camera’s focal point being over-estimated. A simple trick can remove this systematic bias: instead of using the 3D line direction defined by a boundary inside pixel, one uses the direction halfway between that inside pixel and its outside neighbor.

As apparent in the video in Figure 1, the tracking algorithm is surprisingly robust against partial occlusion of the tracked sphere. How is this possible? The described algorithm assumes that the boundary of the set of pixels identified as belonging to the sphere all lie on the mantle of a cone enveloping the sphere, but if the sphere is partially occluded, some boundary pixels will lie inside of the cone, leading to a wrong estimate of both axis direction and opening angle.

In my experiments, this iteration converged rapidly towards the true set of tangential boundary pixels, needing no more than five iterations in all situations I tested.

I said there would be no error analysis, but I lied. I found a graph (see Figure 4) with data from an experiment I ran when I started discussing tracking error with Alan Yates in the comments of the YouTube video shown in Figure 1. I had forgotten about that. 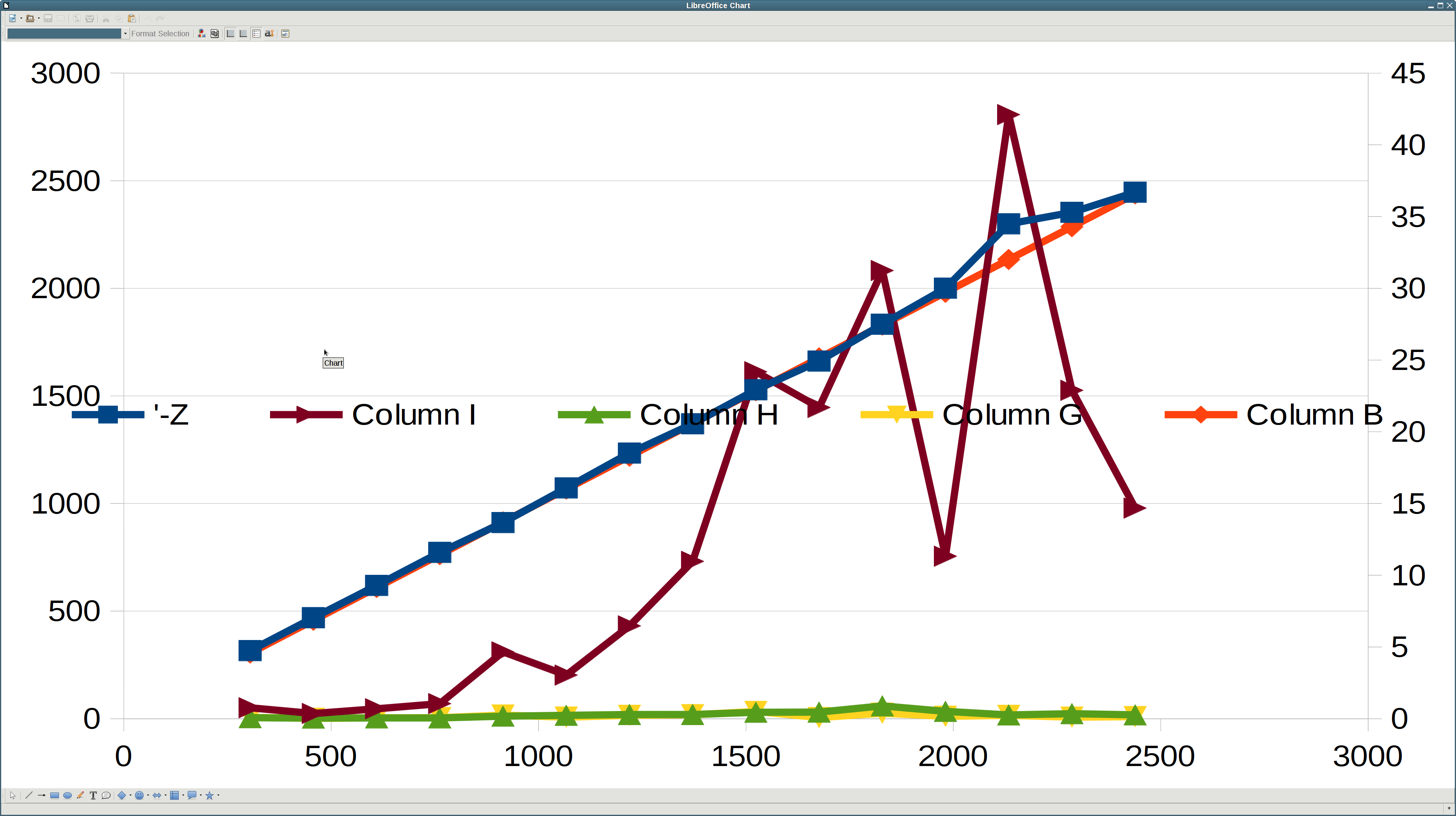 I made the graph in Figure 4 in LibreOffice Calc, and it ate my axis and series labels in revenge. Here’s a legend/rough analysis:

After placing the PS Move controller in any of the test positions, I collected 5 seconds of video frames, i.e., 150 position measurements (the camera ran at 30Hz), averaged them for the position result (blue curve), and calculated their standard deviations for the error results (yellow, green, and maroon curves).

6 thoughts on “How to Track Glowing Balls in 3D”