END_OF_DOCUMENT_TOKEN_TO_BE_REPLACED

The short answer is: yes, it’s real, but… END_OF_DOCUMENT_TOKEN_TO_BE_REPLACED

END_OF_DOCUMENT_TOKEN_TO_BE_REPLACED

I’ve just returned from the 2013 Augmented World Expo, where we showcased our Augmented Reality Sandbox. This marked the first time we took the sandbox on the road; we had only shown it publicly twice before, during UC Davis‘ annual open house in 2012 and 2013. The first obstacle popped up right from the get-go: the sandbox didn’t fit through the building doors! We had to remove the front door’s center column to get the sandbox out and into the van. And we needed a forklift to get it out of the van at the expo, but fortunately there were pros around. 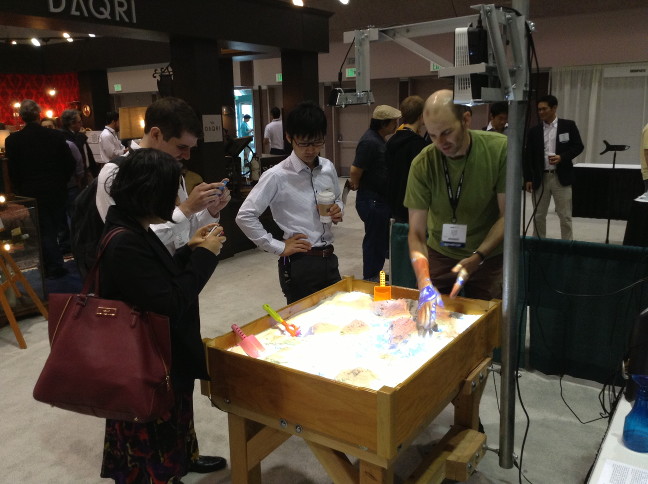 Figure 1: Me, digging into the sandbox, with a few onlookers. Photo provided by Marshall Millett.

END_OF_DOCUMENT_TOKEN_TO_BE_REPLACED 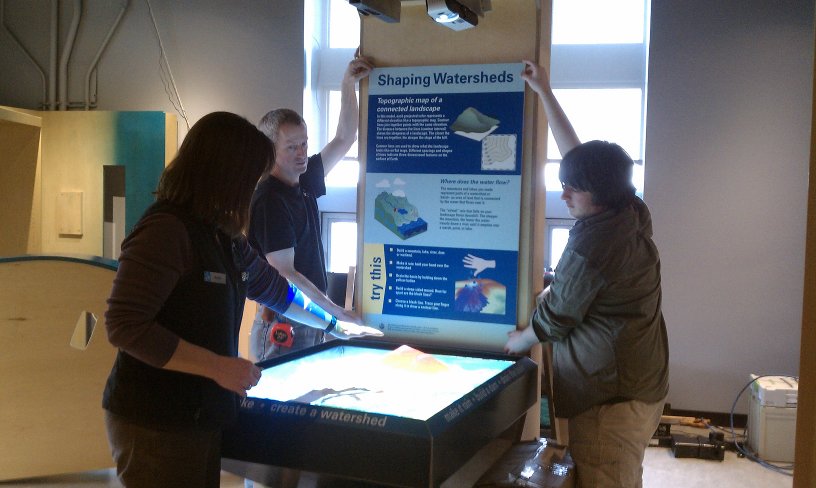 END_OF_DOCUMENT_TOKEN_TO_BE_REPLACED

… build their own augmented reality sandboxes, that is.

We still haven’t installed the three follow-up AR sandboxes at the participating institutions of our informal science education NSF project — Tahoe Environmental Research Center, Lawrence Hall of Science, and ECHO Lake Aquarium and Science Center — but others have picked up the slack and gone ahead and built their own, based on our software and designs. 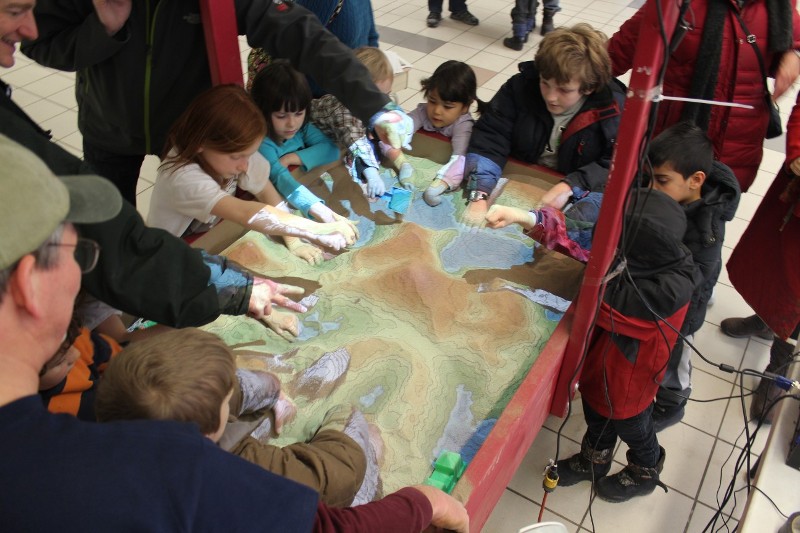 The newest addition to my External Installations page is “Code Red,” Ithaca High School’s FIRST Robotics Team 639, who just unveiled theirs at their school’s open house (see Figure 1), and were kind enough to send a note and some pictures, with many more “behind the scenes” pictures on their sandbox project page. There’s an article in the local newspaper with more information as well.

Together with Bold Park Community School’s, this is the second unveiled AR sandbox that I’m aware of. That doesn’t sound like much, but the software hasn’t been out for that long, and there are a few others that I know are currently in the works. And who knows how many are being built or are already completed that I’m totally unaware of; after all, this is free software. Team 639’s achievement, for one, came completely out of the blue.

Update: And I missed this Czech project (no, not that other Czech project that gave us the idea in the first place!). They built several versions of the sandbox and showed them off at hacker meets. And they say they’re currently trying to port the software to lower-power computers. Good on them!

Update 2: One more I missed, this time done by/for the Undergraduate Library at the University of Illinois, Urbana-Champaign. I don’t have any more information; but this is the YouTube video.

I should point out that these last two were news to me; I only found out about them after googling for “AR sandbox.”

So please, if you did build one and don’t mind, send me a note. 🙂 There’s a ready-made box awaiting your input right there ↓↓↓↓