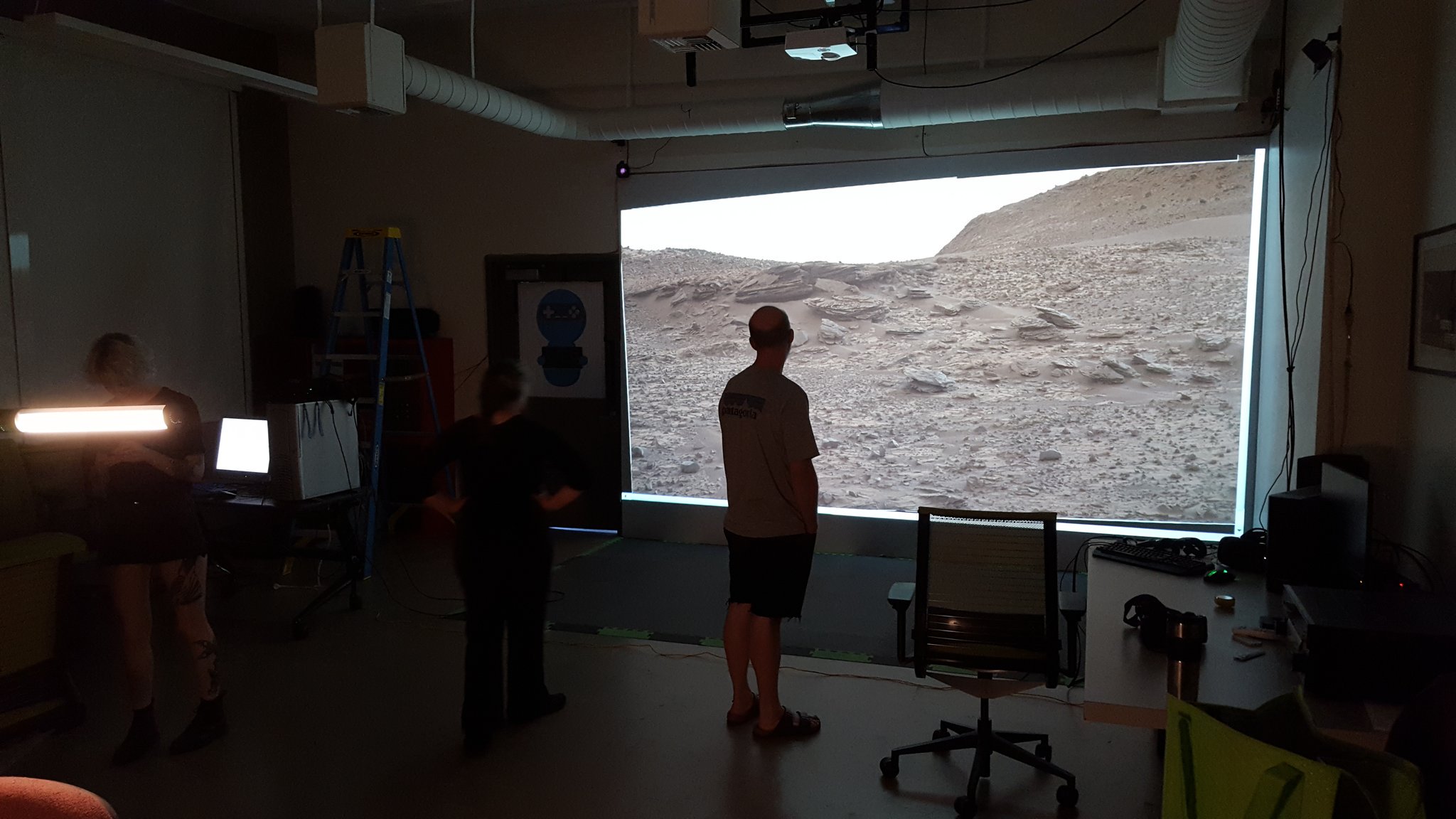 The fundamental idea here was to use several 3D models, created or reconstructed from real data sent back either by satellites orbiting Mars or by the Curiosity rover itself, as backdrops to let Dawn talk about the goals and results of the MSL mission, and her personal involvement in it. Figure 1 shows a backdrop in the real sense of the word, i.e., a 2D picture (a photo taken by Curiosity’s mast camera) with someone standing in front of it, but that was not the idea here (we didn’t end up using that photo). Instead, Dawn was talking while wearing a VR headset and interacting with the 3D models she was talking about, with a secondary view of the virtual world, from the point of view of the film camera, shown on the big screen behind her. More on that later. END_OF_DOCUMENT_TOKEN_TO_BE_REPLACED

I’ve been spending all of my time over the last few weeks completely rewriting Vrui‘s collaboration infrastructure (VCI from now on), from scratch. VCI is, in a nutshell, the built-in remote collaboration / tele-presence component of my VR toolkit. Or, in other words, a networked multi-player framework. The old VCI was the technology underlying videos such as this one:

Figure 1: Collaborative exploration of a 3D CAT scan of a microbial community, between a CAVE and a 3D TV with head-tracked glasses and a tracked controller.

END_OF_DOCUMENT_TOKEN_TO_BE_REPLACED

It’s been more than two years since the last time I posted set-up instructions for Vrui and HTC Vive, and a lot has changed in the meantime. While Vrui-5.0 and its major changes are still not out of the kitchen, the current release of Vrui, Vrui-4.6-005, is stable and works very well with the Vive. The recent demise of our CAVE, and our move towards VR headsets until we figure out how to fix it, have caused a lot of progress in Vrui’s set-up and user experience. The rest of this article contains detailed installation and set-up instructions, starting from where my previous step-by-step guide, “An Illustrated Guide to Connecting an HTC Vive VR Headset to Linux Mint 19 (“Tara”),” left off.

If you did not follow that guide and its prerequisite, “An Illustrated Guide to Installing Linux Mint 19 (“Tara”),” this one assumes that you already have:

If you use a Linux distribution that is not Ubuntu-based, such as my own favorite, Fedora, or another desktop environment such as Gnome Shell or Cinnamon, you will have to make some adjustments throughout the rest of this guide.

This guide also assumes that you have already set up your Vive virtual reality system, including its tracking base stations, and that your Vive headset is connected to your PC via HDMI and USB (I will publish a detailed illustrated guide on that part soon-ish). END_OF_DOCUMENT_TOKEN_TO_BE_REPLACED

END_OF_DOCUMENT_TOKEN_TO_BE_REPLACED

I know, the Oculus Rift DK2 is obsolete equipment, but nonetheless — there are a lot of them still out there, it’s still a decent VR headset for seated applications, I guess they’re getting cheaper on eBay now, and I put in all the work back then to support it in Vrui, so I might as well describe how to use it. If nothing else, the DK2 is a good way to watch DVD movies, or panoramic mono- or stereoscopic videos, in VR. 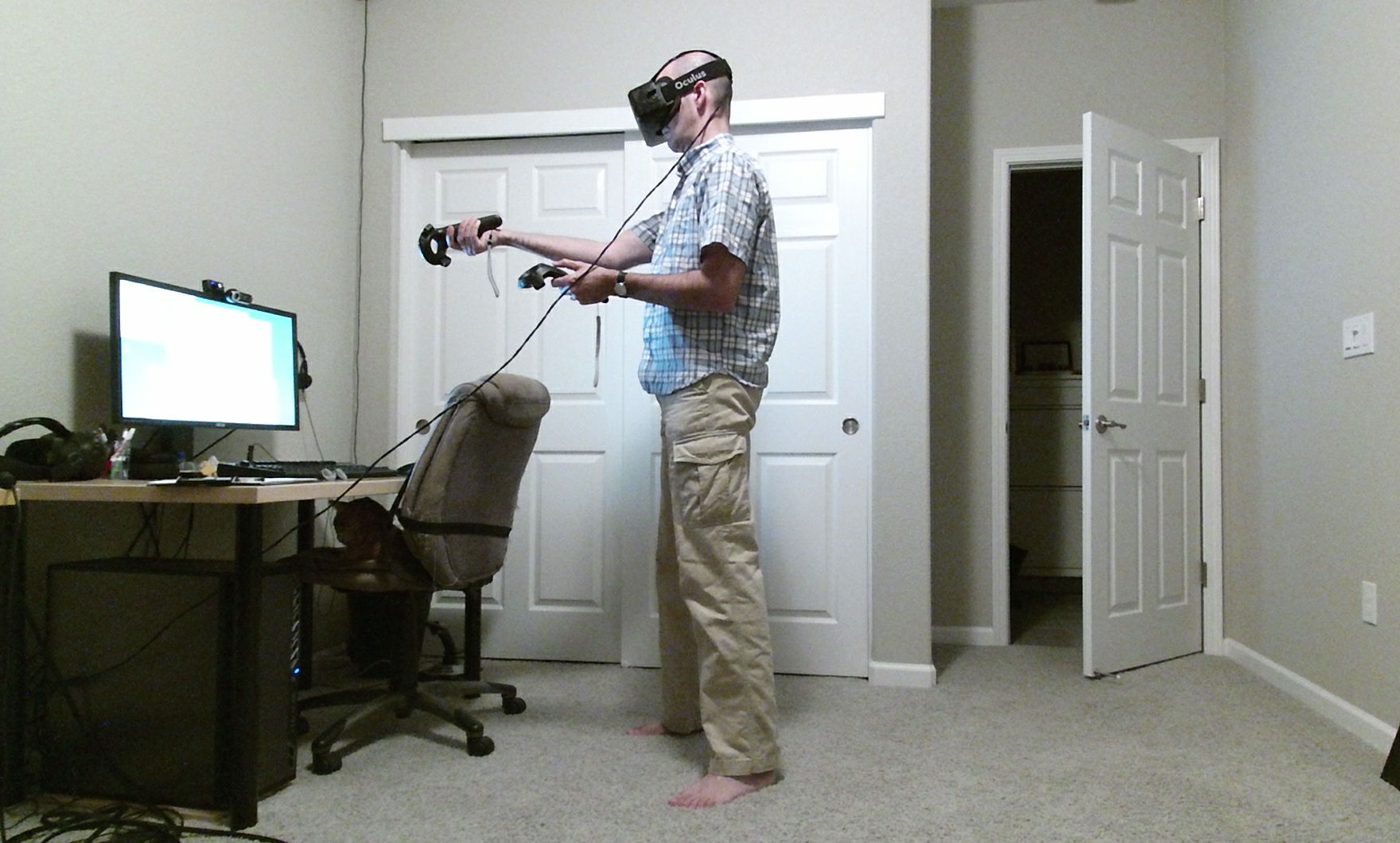 Figure 1: Using an Oculus Rift DK2 headset with a pair of Vive controllers — because why not?

END_OF_DOCUMENT_TOKEN_TO_BE_REPLACED

It has been way too long that I have publicly released a new version of the Vrui VR toolkit. The main issue was that I had been chasing evolving hardware, from the Oculus Rift DK1 to the Oculus Rift DK2, and now to HTC’s Vive. During that long stretch of time, I was never happy with the state of support of any of these devices.

That’s finally changed. I have been working on full native support for HTC’s Vive head-mounted display over the last few months (with the first major break-through in May), and I think it’s working really well. There are still a lot of improvements to make and sharp edges to sand off, but I feel it is worthwhile releasing the software as it is now to get some early testing done. So without much further ado, here is Vrui-4.2-004.

To prevent this kind of thing from happening — at least in most cases — Valve implemented a system called “Chaperone” into the SteamVR run-time framework that runs their and HTC’s Vive VR headset (and potentially other headsets, through Valve’s OpenVR layer). END_OF_DOCUMENT_TOKEN_TO_BE_REPLACED

END_OF_DOCUMENT_TOKEN_TO_BE_REPLACED 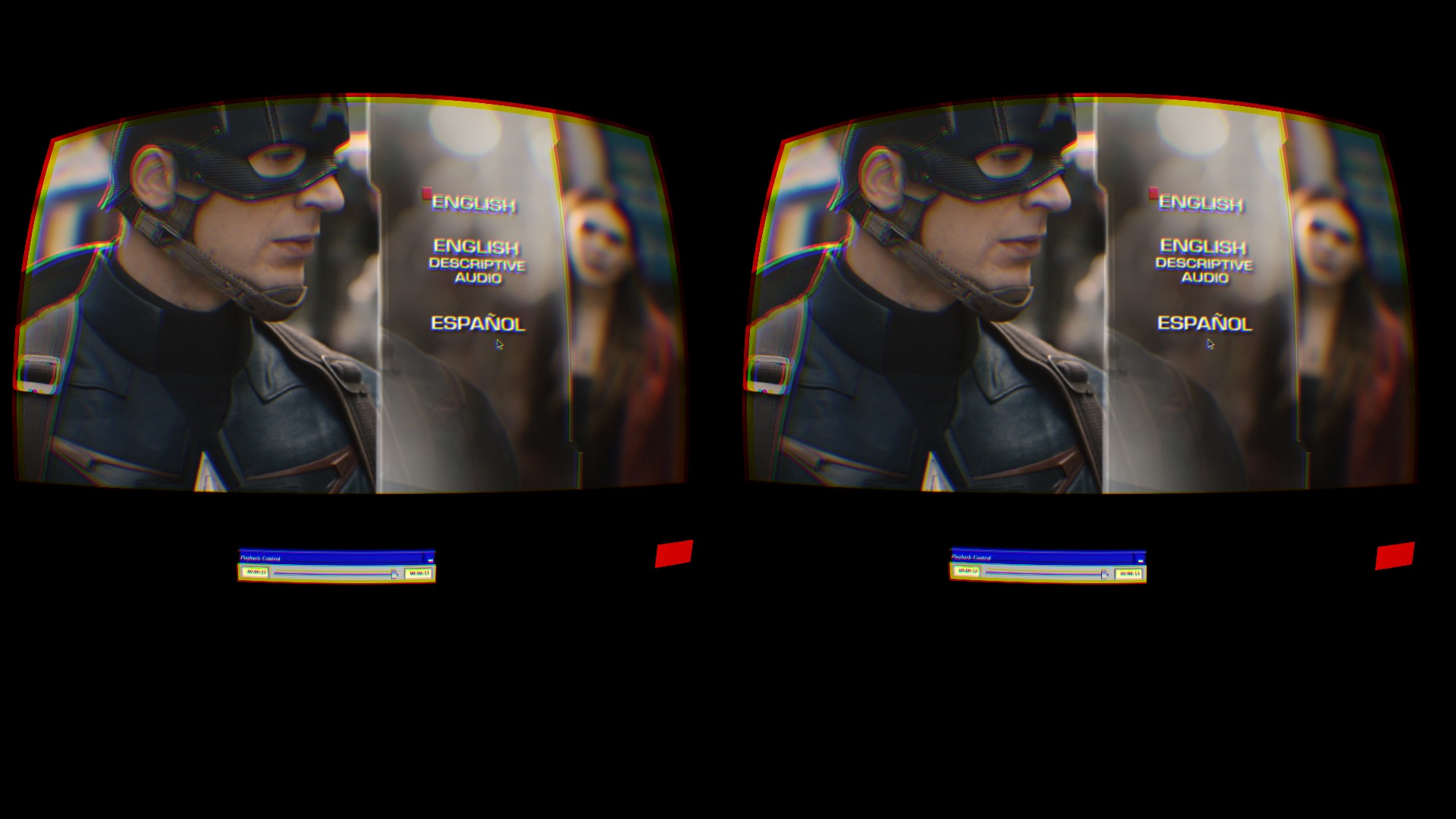 END_OF_DOCUMENT_TOKEN_TO_BE_REPLACED

I finally managed to get the Oculus Rift DK2 fully supported in my Vrui VR toolkit, and while there are still some serious issues, such as getting the lens distortion formulas and internal HMD geometry exactly right, I’ve already noticed something really neat.

I have a bunch of graphically simple applications that run at ridiculous frame rates (some get several thousand fps on an Nvidia GeForce 770 GTX), and with some new rendering configuration options in Vrui 4.0 I can disable vsync, and render directly into the display window’s front buffer. In other words, I can let these applications “race the beam.”

There are two main results of disabling vsync and rendering into the front buffer: For one, the CPU and graphics card get really hot (so this is not something you want to do this naively). But second, let’s assume that some application can render 1,000 fps. This means, every millisecond, a new complete video frame is rendered into video scan-out memory, where it gets picked up by the video controller and sent across the video link immediately. In other words, almost every line of the Rift’s display gets a “fresh” image, based on most up-to-date tracking data, and flashes this image to the user’s retina without further delay. Or in other words, total motion-to-photon latency for the entire screen is now down to around 1ms. And the result of that is by far the most solid VR I’ve ever seen.